Google have today been seen to have released a new homepage design for Google’s search engine. With this been the worlds most visited website, the updates are not too extreme in order to keep people used to the design. However for the more tech savvy people, the updates change a lot on the website. 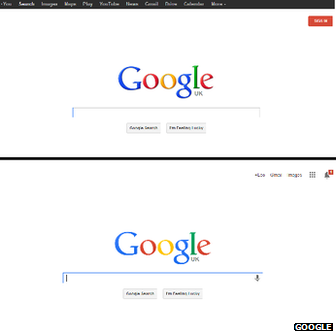 First and foremost, the biggest change is the logo. It typically had some shadow effects and was a bit chunkier. Since Google has changed the logo for other divisions such as Motorolla, we can expect this new logo to be much flatter – which it is. The logo is very simple as it was before but very flat which is typical across much of the internet today.

It is a lot nicer in my opinion as I prefer the simple format for logos. Either way, it is not a huge change and it still has the typical color style. Most people would not notice a change I believe. Another change is that the black bar which once showed links to applications, has now gone. Instead there is a group of four squares that you can press which opens an applications screen.

These design changes come in the same month that Yahoo updated their logo and changes were made to the Bing search tool.

Not everyone will be able to see these changes yet as they are only done to a few areas as of this point. This news comes as the first change to the Google logo since 2010.

“This is the season for consumer tech updates and whether you sell a product or it’s free everyone wants to look fresh ahead of the Christmas shopping season,” said Sarah Rotman Epps, an analyst at the tech consultancy Forrester.

“What they are doing is actually pretty subtle and that’s because these software companies depend on user loyalty – they don’t want to do anything that would alienate their customers.”

One issue that may be apparent is that people may not know they have to click on the squares in order to see other websites, however we will have to see how it goes.

A Google spokeswoman said that similar changes would now be “slowly rolled out” across its products.

This site uses Akismet to reduce spam. Learn how your comment data is processed.

Founded in 2012, Tech News Central delivers technology news from around the globe to tech enthusiasts. Our aim is to bring news to the forefront of your lives and allow you to keep up to date with the ever-changing world of technology. Quantity is not our aim when it comes to this site; we hope to convince you to stick around by the quality of what we write.

We use cookies to ensure that we give you the best experience on our website. If you continue to use this site we will assume that you are happy with it.Ok